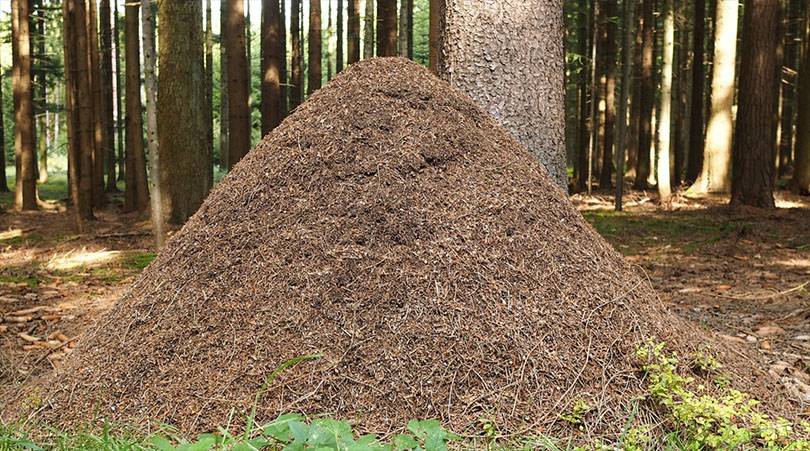 In the woods lies a large boulder with fluffy moss on one side. Look carefully at this unusual compass, which nature herself created. We have already written about various signs of orientation, orientation in the woods and with the help of the compass. We advise you to read these interesting articles.

Mosses and lichens dont like heat and light, so they grow on the shady side. So, where the mosses and lichens are, its north; on the south side, theres less or no moss. Now navigating through the mossesWill provide no difficulty. The direction can also be determined by the soil around the stone. It is relatively dry on one side of it (south) and wetter on the opposite side (north). Usually an old, rotting stump has moss on all sides. But to determine where north and south are, you need to check the moisture in the moss, not the soil.

Another natural compass that will always help you find the right direction in the woods are anthills. Most of them are located on the southern side of a tree, stump, bush, because ants are heat-loving insects. The southern side of the anthill is usually sloping, while the northern side is much steeper.Ant orienting. Ant-hill orientation is pretty easy to remember and understand. In the tundra, as well as in the pine forests (read more: What types of forests) and taiga bog, in Western and Eastern Siberia, in the Far East there grow lichens (jagel, or deer moss) of the cladonia family, which serve as indispensable food for reindeer, especially in winter. Sources of valuable antibiotics and enzymes, they can also serve as a compass. Darker than the whole lichen, the tips of their branchy bushes always face north. Therefore, going north, you see the dark, surface of the moss (lichen) cover, when moving in the opposite direction, i.e. south, the dark coloration is not visible, and the bushes seem to be lighter

In order not to get lost in the woods, it is necessary to choose well-marked landmarks in advance, which help to determine the location, direction of travel and measure the distance to the intended points on the way. The writer A. Avdeenko in his book Above the Tisza tells about his character Kablukov:

There are peculiar, unusual landmarks – light bulbs – in areas of the forest infested by the sturgeon. You walk in the quiet of the forest at night, and suddenly in the impenetrable darkness flash bright lights of phosphoric light: the growing ends of the rhizomorphs of the sturgeon glow. Risomorphs are woven mushroom openok, very long, shiny black-brown strands that look like cords of electrical wires, As many rhizomorphs as there are bulbs around. Openok usually settles on stumps and other rotting remnants of wood. The fungus of the stump, covered with a dense shell, strongly branched under the bark of trees, especially weak ones, penetrates the living wood with its ramifications, sucks its juices and destroys the tree. The ends of the fungus (rhizomorpha), protruding outward, glow like bright miniature electric bulbs.

On a summer night on a winding taiga trail, forest beacons can point the way. These are rotters glittering with phosphorous fire. Most brightly phosphorescent are rotten stumps. From top to bottom, trembling glowing streams flow down them. Myriads of bacteria nest here. Bioluminescent microbes contain complex chemicals – luciferin and luciferose. Different bacteria have their own fluorescents, differing in glow strength and color.

Quite a few superstitions have spawned these lights. But the cold night light is explained simply. It is bioluminescence, that is, a living glow, especially active in windy weather, with plenty of oxygen and moisture. It doesnt stop around the clock. So, in order not to wander at night in the forest when returning from a route covered during the day, it is advisable in advance to remember the location of rotting trees or half-destroyed stumps, which will be a kind of light indicators on the way, in addition, orientation by moss or anthills will help you find the right direction.

Recommended for you:
Bear Hunting: Approach Hunting, Oat Hunting, and Other Modern Tactics
How to Navigate By the Stars
How to Properly Set Up a Tent When Camping
Signs that a Wound is Infected. Causes and Treatment of an Infected Wound
What Foods to Take With You on a Hike
How to Make a Wild Boar Hunting Spot
Survival Kits - Why are They so Popular?
How to Start Fishing
SOS signal with a knock. How to give SOS signals correctly
How to Properly Prepare for the First Hike
First Aid for Lightning Strikes: Step-by-Step Actions
Making Tea in Nature
How to get a fishing license
Snow Avalanche: Varieties and Safety