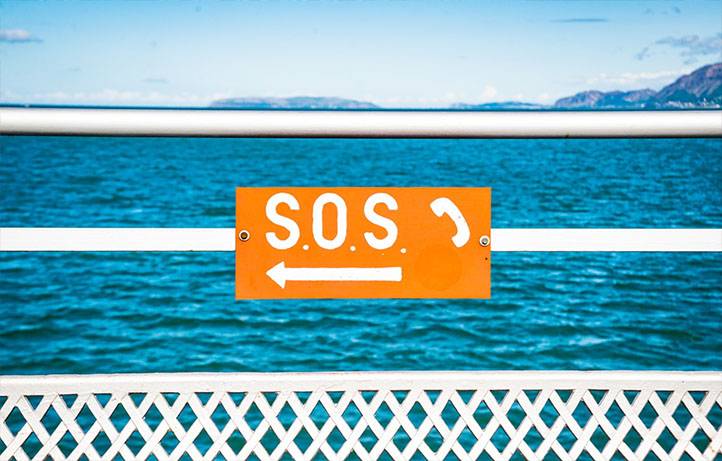 SOS signal with a knock. How to give SOS signals correctly

Weve talked a lot about how to survive in emergencies. Being lost in the woods, being in an unknown area when an airplane or train crashes, in the middle of the sea when a ship is wrecked – survival skills are definitely always needed. But sometimes it also happens that ones own strength is not enough, or the situation is so desperate that one cannot do without outside help. So, in addition to knowing how to behave in such a situation, you also need to know how to call for help.

The win-win option is fire

In any wilderness environment, the surest way to signal distress is by fire. If you can get a fire, you can already use several ways to signal SOS:

You can use the international distress signal – three campfires in the shape of an equilateral triangle. But note that the distance between the bonfires must be at least three dozen meters, so that from a height they do not merge into one point. Of course, and one large fire can also be used as a signal, but it does not look as suspicious as three, which transmit the word SOS for sure. Make the fire in an open area and ideally on a hill of some kind.

If youre stuck, for example, in a coniferous forest and cant get a bright-burning fire going, a smoky fire can help. Throw a lot of twigs, cones, moss, grass – and a large stream of white smoke will stand out well against the dark foliage.

You can lay the word SOS out of dry twigs and also set them on fire. It is better to do this in an open area, and also preferably on a hill. For each letter, dig grooves, about three meters long, otherwise they will be difficult to see from a height. In the grooves throw dry branches and set them on fire. This method is good especially in the wintertime, as the white snow will always leave contrasting traces from the burning branches.

Got a flashlight or a mirror? Great!

Light signals are also an effective option. If you happen to have a flashlight with you, thats very good. The light from the flashlight can be seen at a sufficiently long distance. As soon as you hear the noise of an airplane or helicopter, start shining the rescue signal, rhythmically covering the flashlight with your hand – three short signals, three long and again three short ones. After a short break repeat the SOS signal again. It is better not to drain the batteries unnecessarily – use the flashlight only when you are sure that there is a potential rescue object above you.

Also, the light signal of rescue can be made with the help of a sun bunny. But for this you will need not only a mirror or its likeness, but also, of course, the sun. On a cloudless sunny day, the reflection of the sun ray is quite realistic to see from the plane. But the main thing here is to work out clearly the three dots – three dashes – three dots, so that the pilots clearly understand that this is not an ordinary play of light. You can use foil, a wide knife blade, or something similar capable of catching and reflecting sunlight as a mirror.

If you dont have anything with you, play with the shadow

Often there are no matches, no lighter, no flashlight. In this case, the SOS signals must be constructed from improvised means, ensuring, among other things, by casting a shadow, the maximum contrast between the letters themselves and the place where they are located.

In summer, you can find an open clearing and lay out the letters on it from the branches, and in the same way you should dig grooves and sprinkle the letters on the contour – from the constructed slides on the grass will appear a shadow, which will increase the contrast of the letters. In addition, logs, large branches, etc. will also give a good shadow. – The higher the letters, the greater the shadow.

If there are rocks in the area of your disaster – they would also be great for a rescue inscription.

In winter, the SOS signal is similarly laid out in the snow by making the letters outline with snow dug out of the grooves. The higher you make the sides, the greater the shadow.

Note that it is better to make the letters using mostly straight lines and angles, as such combinations are rarely found in the natural environment and they will definitely seem suspicious. In addition, since such signals are not as conspicuous as the light from a fire or from a lantern, it is better to try to make some shadowy signals.

You can think of many more ways to signal rescue, but just in case, never forget that the SOS signal is three dots – three dashes – three dots and try to work off this message in any way available in your situation.

Recommended for you:
How to Behave In the Woods?
Making Tea in Nature
Polaris: How to Find & Interesting Facts
November Vacation on a Budget: Traveling to Argentina
Survival Kit for the Woods - a List of the Most Necessary Things
How to Determine the Sides of the World from an Ant Hill
Wound Treatment On a Hike
How to Make a Tree House With Your Own Hands
What to Do if You Fall Through the Ice: a Survival Guide
What to Do in a Tornado: Safety Tips
How to Make a Fire in the Rain in the Wods. 10 Tips for Making a Fire in the Rain
Sunstroke and Heat Stroke: Signs, Symptoms, First Aid
How to Properly Prepare for the First Hike
How Do You Physically Prepare for a Hike?