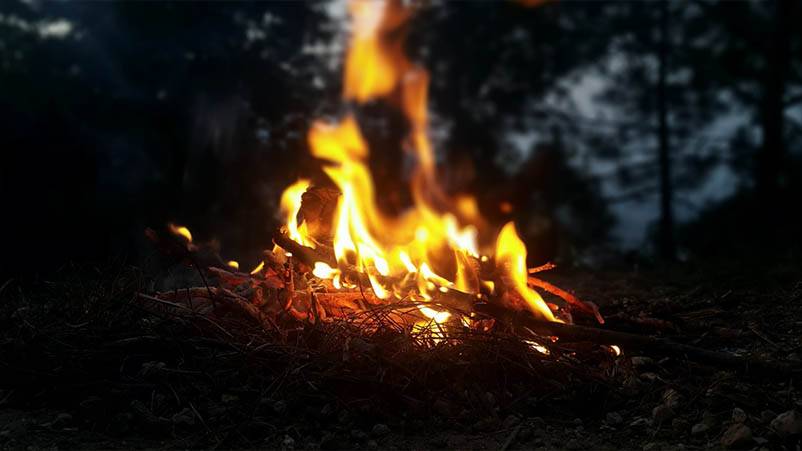 How to make a fire in wet weather and rain

Sometimes all it takes to unintentionally start a fire is throwing an unextinguished cigarette in the woods or forgetting to turn off the iron. And there you have it, forest fires blazing or houses burning. But I have often seen how people in the dry clear weather from dry wood trying to build a fire, in order to cook barbecue and they have without kindling, and even gasoline do not get anything)). Do they have their hands in the wrong place, or even the slightest knowledge of how to properly build a fire. And especially if you have to make a fire in the rain or in wet weather, these craftsmen completely despair. Now lets look at how to make a fire in wet weather.

Making a fire in wet weather

Look for conifers. Branches of pine and spruce are great for lighting a fire in the rain. The fact is that conifers contain resin – oleoresin. It burns well even in high humidity. Before using such firewood, separate the bark, as it absorbs moisture, but also protects the wood itself from getting wet. Coniferous wood burns rather quickly almost leaving no embers, so in addition to the needles, you need to take other species of trees. Only before you put the branches of deciduous trees in the fire remove the bark, it has too much moisture. The exception is the birch. Birch bark – birch bark can not be removed, or you can take it off and use it to light the fire. The birch bark contains resin and burns very well and gives out a lot of heat, enough to start a fire even in rainy and windy weather. When making a fire, especially in wet weather, try to find dry trees that are not fallen. Such trees are less likely to get wet when it rains and are more likely to have dense wood rather than rotten and decayed wood.

When making a fire, try to use split logs and twigs rather than whole logs. These will catch fire faster and more effectively.

In any weather (the exception would be a strong wind), for the initial kindling, make a cone shape fire about 20-30 centimeters in height from small dry twigs and other fast kindling material. The cone shape allows the heat to spread quickly and dry out the top layers of twigs at the same time, resulting in a better kindling fire. If the wind is weak, you should light the fire on the windward side, so that the wind blows the fire. But if the wind is strong, you wont be able to light the fire that way. If the wind is strong, you should dig a small hole (if it is acceptable and the hole is not filled with water) or build a shelter around the fire from stones, earth or branches, which will protect the future fire from the wind.

If you have to light a fire in the rain, make a canopy of spruce branches. Once the fire is well established, a little rain will not be a problem for it.The use of tools for kindling in wet weather, of course, will make it easier to light a fire. Dry alcohol tablets, kindling gels, cotton balls, chaff, bits of clothing or old tissues can save lives when the weather turns bad.All the most flammable items and small dry firewood, chaff should be placed down the fire. And the fire should be lit from below. Trying to light a fire from the top or from the middle is a waste of time and effort. Chickpea is a dry dead plant material that makes it easier to build a fire. The core of the kindling should be filled with chaff. It is advisable to keep a supply of chaff on hand, it may save an extinguished fire or help to build a fire in the future.

You can use an anthill to start a fire in the rain or winter. Just dont be cattle, dont burn a whole working anthill. In winter, you can safely take the top of the anthill. it is still empty. And in summer or in the season when ants are still in it, take the amount of dry wood from the anthill strictly necessary for kindling, so as not to spoil the whole anthill. The wood in the anthill is always dry, even in the rain.

10 tips for building a fire in the rain

Raw, cold weather is one of the deadliest elements. Hypothermia is the most frequent cause of death in the wild, at least in our temperate latitudes. And the most dangerous temperature is -5…+5 degrees. Such temperature, combined with high humidity, forms a deadly cocktail. The most effective protection in such a case is, of course, fire. However, it is when you need it the most – it is the most difficult to get it. Today you will learn the easiest way to make a fire in the rain.

No matter what anyone says, the most effective way to light a fire in the rain is to bring a can of gasoline with you. Were certainly not going to call for such drastic measures, but a pre-prepared kindling is the best way to avoid problems in a camping trip. Suitable options include cotton disks with paraffin (imho, ideal), dry alcohol, plexiglass, rubber from bicycle cameras, etc. Anything that is easy to ignite and gives a good and long-lasting flame will do.

Homemade is a good thing. But if you are already in the woods, continue the same preventive approach. Gather some natural firewood. Even if its wet, youll have time to dry it out with your body heat. You can even carry a small bundle of dry kindling with you.

Usually, wood only gets wet on the outside while remaining dry on the inside. This is especially true of the bark. Simply remove the wet top layer with a knife, thereby removing the lions share of the accumulated moisture. The wood will catch fire much faster.

Sometimes stripping the bark is not enough. For example, when you make fire by rubbing, you need perfectly dry wood. Well, theres a solution to that, too. Saw a log and then split it. Inside the logs will be perfectly dry.

Even if you dont have any kindling, you can make it out of wood. Split the logs into chunks, and then tweak the shavings so that they stay on the chunk to form a feather. Chips, especially small ones, burn very well, even with a flintstick.

Once, as a rookie, I got caught in the rain. The weather had been wet for several days. I needed to make a fire as a matter of urgency. I had no kindling, but I had lard. I made brushwood, took off soaked bark and smeared lard on every twig. Animal fat is an excellent combustible material that allowed the wet wood to burn quickly.

Wet, damp earth is not the best help in making a fire. Therefore, make a platform of as dry logs as possible. Small gaps between the logs will also help to create more air flow.

Once the flames are lit, take care of the future. Prepare firewood, even if it is soaked through, and then dry it near the fire. Make a kind of fence that will also reflect the heat back at you.

Very often the problem is not only the rain, but also the wind. Therefore, take care of additional protection for your shelter in advance, in order not to lose the last match at the most inopportune moment. At the same time do not forget that the fire needs oxygen – light air movement will only help you.

10. Use the correct form of kindling

Place the kindling in the form of a cone – this shape concentrates the flame, so the kindling dries faster and heats up better.

Recommended for you:
How to Properly Prepare for the First Hike
What Foods to Take With You on a Hike
Snow Avalanche: Varieties and Safety
Sunstroke and Heat Stroke: Signs, Symptoms, First Aid
Hunting With Stuffed Ducks in the Fall
First Aid for Lightning Strikes: Step-by-Step Actions
10 Easy Ways to Make a Fire Without Matches
What to Do if You Fall Through the Ice: a Survival Guide
How to Remove a Tick Safely
How to Open a Jar With a Lid - 5 Ways
How Do You Physically Prepare for a Hike?
Aggressiveness of Wild Animals Toward Humans
How not to Get Lost in the Woods: a Reminder for Nature Lovers
How to Behave In the Woods?