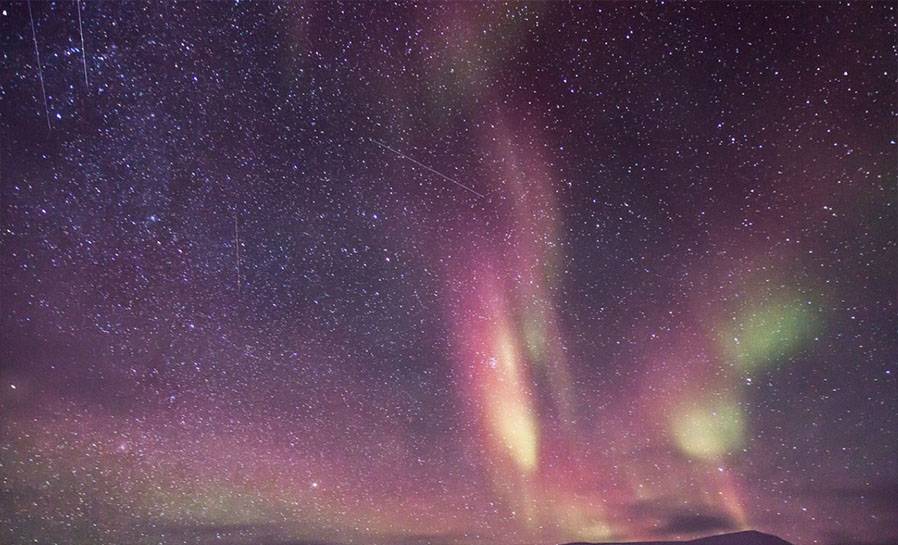 Polaris: How to Find & Interesting Facts

The distance to the Pole Star is 447 light years. Whether this is a lot or not can be understood by performing a series of simple arithmetic operations, which results in a seventeen-digit number corresponding to the more humanly comprehensible kilometers. However, despite such a colossal distance we are at, for many centuries Alpha Minor has played a significant role in the life of mankind.

There is not a single celestial body in the known to mankind galaxy that has so many names. And almost all of them are somehow related to its location relative to our planet. The Pole Star is located at the pole, which means that for the Earth it is always stationary.

Some nations recognized it as a peculiar stake driven into the sky, around which all others revolve. This is where some of the names come from:

These names are found in the ancient writings of the Turkic and Finno-Ugric peoples.

Many years of research on this luminary have shown that its size is larger than the Sun and that it has two small satellites. According to the Hertzsprung-Russell diagram, it is located in its upper part by volume and belongs to the category of supergiants with its inherent characteristics:

Distance to our planet

The topic of distances from our planet causes a long debate among astronomers. Many of them disagree with the data, which have been recognized as official, and believe that they may be wrong by a third of their magnitude.

Officially, Alpha Minor is considered to be 447 light years away, or 137.4 parsecs. In other, more comprehensible terms, it can be characterized as follows:

Accordingly, 447 years should be multiplied by the value obtained and get the required figure characterizing the remoteness of the North Pole Star from the Earth.

Life of a giant

If you look closely at the North Pole Star through a telescope, you can see that it emits a yellowish light. This is somewhat strange-were used to thinking that it should be white.

Like most other celestial bodies that act as the sun in their systems, Polaris is brighter than our luminary, as is evident from a glance at the night sky. Its surface temperature is about 6,000K.

By solar standards, Alphas existence is short, and vital changes occur after its core runs out of hydrogen. This property is inherent in almost all stars belonging to the supergiant group. The history of their existence extends over several million years and makes them so-called pro-evolutionary cosmic objects.

Such characteristics do not mean that they should be attributed to old stars or constellations – the topic of their life cycle is addressed here. In particular, for the North Pole Star, it has already overcome the middle of its existence.

If we try to construct a hypothetical hypothesis of what Alpha was like in the Milky Way galaxy many years ago, we can come to the following conclusions:

The surface temperature reached 18,000 K, 3 times the solar temperature.
Heavier than the Sun by a factor of 5, and 3.5 times its radius length.
Recall that all these indicators have been inherent in the star for a very long time, the current parameters have already been called a little earlier.

The main myths about the North Star

This celestial body has the maximum number of characteristics and various myths found in almost every nation that inhabited our world. Mysterious, bright, distant and at the same time close, it has been haunting mankind for centuries. It is always located at one point in the night sky and shows sailors and others who have lost their way the right direction to the north and south poles.

If ancient Greek mythology is to be believed, the Little Bear is none other than the son of the thunderer god Zeus, Arcadus. However, despite the long acquaintance of man and Kinosura, there are many erroneous assumptions associated with it:

The assumption that the North Star never goes below the horizon is correct. However, the fact that it does not move is incorrect. Simply the axis of rotation of the celestial body completely coincides with the Earth, so they are always in the same position.
The location relative to the horizon will change depending on the displacement across the hemisphere. Descending toward the equator, you can see how Alpha will descend closer and closer to the horizon.

The opinion that it is the brightest is mistaken. If you try to focus on this feature, you are unlikely to find it, because of all the known it is only in the 48th place. In the northern hemisphere, you can err in favor of Sirius or Vega.

How to Find Polaris in the Sky

It can be found in the night sky without the use of telescopes or additional optics (assuming good vision). Polaris always points in the direction of the planets north pole.

The easiest way to detect it is to orient to the neighboring constellations. The meaning in this case is the absolute accuracy: relative to each other, the stars are always in the same place, that is, stationary. Therefore, North is always located at the end point of the tail of Ursa Minor and is distinguished by the fact that it shines brighter than the others in the constellation. You can see its location as part of the constellation by paying attention to the photo.

If you can not find it by constellation because of uneven cloud cover or simple inexperience, you can use another way. It is possible to determine its location with a medium quality camera.

To do this, you have to make the track shown in the photo. Once you have it, you can safely say that you have the polar star in your hands. Due to the fact that the frequency of rotation relative to the Earth is practically zero, it enters strictly in the center of the luminous tracks.

For centuries, the Pole Star has helped travelers across the Northern Hemisphere to unmistakably determine the sides of the world. Many of us assumed that this required additional measuring instruments, although in fact it turns out to be quite easy to find.

The guiding thread of the Polar Star

The mysterious, bright, distant and so close Polaris has been haunting scientists for centuries. Modern astronomers still cant unravel the mystery of this star. It immovably keeps its bearings to the North, helping lost travelers to find their way, but for science keeps a secret about itself.

In ancient mythology, there are several stories associated with the name of the Pole Star. According to one version, the Little Bear was the son of Zeus Arcadus, and according to another, Zeus turned the nymphs Melissa and Kinosura into the Big Dipper and Little Dipper in gratitude for saving their lives.

Did you know… 10 facts about the North Star

The Mystique of the Polar Star

The indigenous peoples of the North are quite superstitious, so they treat the Polaris with deep respect, and perhaps for good reason. There is a legend that the souls of the dead go to a beautiful palace, which is located directly under this mysterious celestial body, and when it opens its doors, it radiates unusual light (the famous Northern Lights).

Today each of us is able to give our own Polaris to a loved one. Our Galaxy invites everyone to choose their brightest and biggest Polaris, give it the name of a dear person and follow it as a guiding star along the path of life full of bright events and impressions.

Recommended for you:
What to Do in a Tornado: Safety Tips
How not to Get Lost in the Woods: a Reminder for Nature Lovers
Bear Hunting: Approach Hunting, Oat Hunting, and Other Modern Tactics
Survival Kit for the Woods - a List of the Most Necessary Things
What Canned Food to Take on a Camping Trip?
10 Easy Ways to Make a Fire Without Matches
How to Open a Jar With a Lid - 5 Ways
November Vacation on a Budget: Traveling to Argentina
How to Navigate By the Stars
What Foods to Take With You on a Hike
How to Make a Tree House With Your Own Hands
12 Fishing Knots for Hooks
Wound Treatment On a Hike
How to Make a Wild Boar Hunting Spot