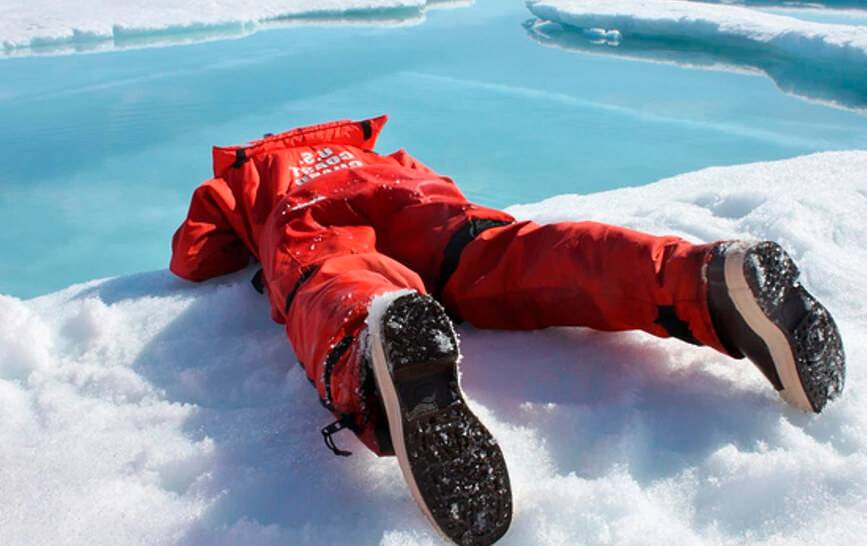 What to Do if You Fall Through the Ice: a Survival Guide

Going on winter fishing, you should remember that there is always a risk of falling through the ice. Safe thickness of the ice cover in stable frosty weather is 4-5 cm for one person, provided that the air temperature does not rise above 5 degrees. If it is closer to spring or late fall, a safe ice layer is at least 10 cm to support the weight of one person. The strongest ice can be recognized by its bluish or greenish hue, with no air bubbles, and its formation occurred in frosty, windless, stable weather. Other outward signs will indicate the unreliability of the ice layer, which can fail under the weight of a person. To help yourself if no one is around, or to save another person, you need to know what to do if you fall through the ice.

In order not to get under water, you should adhere to the following rules of staying on the ice:

What to do if you fall through the ice: the rules

If you happen to fall through the ice, you need to follow the recommendations:

Assisting someone who has fallen through the ice

What should you do if you fall through the ice and need help? Provided you have warm, dry clothes, a person can stay in the water for about 50 minutes, but the first signs of frostbite of the hands begin to show after 20-30 minutes. Therefore, help for a person who has fallen through the ice should be provided as quickly as possible.

If the first aid team consists of three people, its actions should be as follows:

Recommended for you:
Survival Kit for the Woods - a List of the Most Necessary Things
Aggressiveness of Wild Animals Toward Humans
How to Make a Wild Boar Hunting Spot
How to Start Hunting
How to Make a Tree House With Your Own Hands
How to Remove a Tick Safely
How to Determine the Sides of the World from an Ant Hill
How to Properly Prepare for the First Hike
How to Behave In the Woods?
What to Do in a Tornado: Safety Tips
How to get a fishing license
Surviving in the Wilderness: 8 True Stories of People Who Managed to Survive in the Wild
SOS signal with a knock. How to give SOS signals correctly
How not to Get Lost in the Woods: a Reminder for Nature Lovers