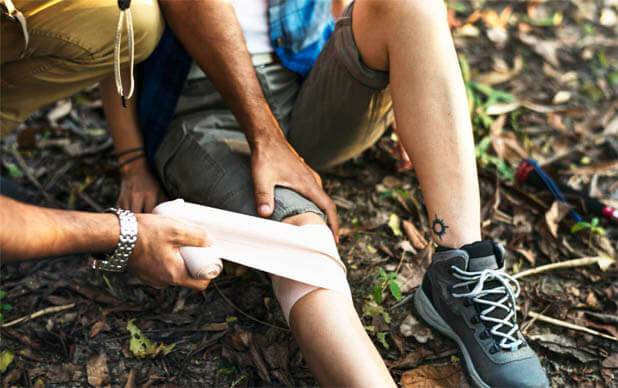 Wound Treatment On a Hike

When hiking, there is always the risk of some kind of injury or wound to the skin surface. Proper treatment of wounds helps them heal as quickly as possible without the risk of blood poisoning, suppuration, or infection. Of course, in this case, it is desirable to have a minimum set of necessary first aid kit for wounds and abrasions, which refers to pre-treatment.

There are general rules for the treatment of wounds:

If you do not treat a tissue injury and do not stop bleeding from a deep wound after two hours, there is a possibility of tetanus, sepsis, heart failure, dizziness, and loss of consciousness. If within a day your well-being has deteriorated sharply (fever, chills, confusion, muscle aches and weakness), there is a high probability that an infection has entered the bloodstream and may be contagious, which is very difficult to treat.

Antiseptic will destroy germs, viruses, fungi that have entered the damaged tissue, prevent further development, infection, blood infection. Antiseptic treatment of the tissue should be performed within the first two hours. Antibiotics should not be used instead of antiseptics, because they target only bacterial microflora, while the skin lesion may contain bacterial and fungal, or mixed microflora.

Among the antiseptics are the following fluids for treating wounds of various etiologies and types:

Iodine is used to treat the edges of the damaged tissue, otherwise it can cause a burn. Do not use this antiseptic in diseases of the thyroid gland, kidneys, various dermatitis.

Used in primary treatment after the damaged tissue has been treated with hydrogen peroxide. Just like peroxide, even a small amount of chlorhexidine destroys fungi, germs, viruses. To treat, you need to pour this antiseptic into the wound from a syringe.

Prepare an aqueous solution of furacilin at the rate of 10 tablets per liter of heated water. Cooled solution is used to treat wounds on the skin and mucosa, wetting them with a stream of antiseptic. In addition, it can be applied directly to a gauze bandage. Furacilin solution can be used both for primary and secondary treatment, as well as for purulent wounds.

Only 3% peroxide solution is used. During primary treatment a foam is formed which removes fine contaminants from the wound surface. It is used both for primary treatment and secondary treatment of purulent wounds. Proper use of hydrogen peroxide consists not in applying a dressing moistened with it, but in wetting the wound with a pulsating stream of peroxide. As a rule, treatment with this antiseptic is carried out in the presence of shallow skin lesions, as well as up to the moment when the process of tissue scarring begins. Hydrogen peroxide is not used in combination with other antiseptics, it should be stored in a light-protected container.

Only the edges of the pre-washed wound are treated with alcohol during primary treatment, and then another antiseptic (greenish or iodine) is applied.

Weak manganese solution kills microorganisms. Each treatment should be carried out only with freshly prepared solution. It is used for various injuries of skin and mucous membranes.

It is a modern antiseptic, used for treating open wounds and mucous membrane injuries. It destroys various microorganisms, viruses, bacteria, fungi, and helps with burns.

If you do not have the above remedies, you can use a two percent solution of soda, concentrated salt solution, vodka, chamomile infusion. Decoctions of the herb St. Johns wort, calendula, yarrow, raspberry have antiseptic properties. When open soggy wounds helps aqueous propolis solution. If the injury is shallow, you can prepare a remedy of aloe juice, sea buckthorn oil and rose hips.

Treatment of abrasions and scratches

Abrasions and scratches form when the skin rubs against a hard, rough surface. The surface layer of the skin is damaged, small blood vessels are disturbed, and pinpoint bleeding occurs. As a rule, a large surface of the skin is damaged, causing very painful sensations, since a large number of nerve endings are exposed. The difference between abrasions and deep wounds is that they heal quickly, leaving no scars, since the injury does not affect the subcutaneous tissue.

Treatment of minor injuries consists of cleaning the wound of dirt, earth, other debris with water (preferably running water). After that, antiseptic treatment should be carried out, and a gauze bandage should be covered so that it does not stick to the skin surface.

If the scratches are very dirty, you need to wash them with special care. For example, for wounds on limbs or fingers, antiseptic baths are the best solution. If the torso, knees or elbows are scratched, a wet gauze bandage should be applied to the injured surface and after the wound is dried, antiseptic treatment should be started.

It should be understood that deep wounds must be treated followed by qualified medical care. A deep wound is considered to be more than two centimeters, with penetration of foreign objects, when nerve endings are affected, bringing sharp pain. Before medical treatment consisting of surgical stitches is given, the injury must be treated as quickly and well as possible:

After care is given in the field, it is necessary to see a doctor. Surgical care consists of suturing the wound surface with preliminary dissection, antiseptic treatment, trimming of protruding rough edges of the skin near the wound, and in the presence of purulent lesion – installation of drainage for its outflow. After the inflammatory process is controlled, the doctor sews the wound. After that the affected area is bandaged with an antiseptic ointment in a complex treatment with antibiotics.

Recommended for you:
Making Tea in Nature
Aggressiveness of Wild Animals Toward Humans
How Do You Physically Prepare for a Hike?
How to Behave During a Thunderstorm
How to get a fishing license
What to Do in a Tornado: Safety Tips
10 Easy Ways to Make a Fire Without Matches
Survival Kit for the Woods - a List of the Most Necessary Things
How to Start Fishing
How to Remove a Tick Safely
Hunting With Stuffed Ducks in the Fall
Sunstroke and Heat Stroke: Signs, Symptoms, First Aid
How not to Get Lost in the Woods: a Reminder for Nature Lovers
Snow Avalanche: Varieties and Safety